A classic in Buenos Aires. In the early XXth Century Argentina was already a benchmark country as regards automotive issues. Through these lands the best vehicles could be found and many of them started to be displayed in the first Motor Shows, which took place in the Rose Pavilion where today San Martin Square of the City of Buenos Aires is located.

This which started at the beginning of the XXth Century had an extended pause and resumed its editions by the end of the same Century through the initiative of the Association of Automotive Makers of Argentina (ADEFA), which organized the first International Motor Show of Buenos Aires contemporary in 1998, whilst it became the first motor show of Latin America included in the international calendar of OICA (International Organization of Motor Vehicle Manufacturers).

The exhibition was developed in the Municipal Exhibition Center of Capital Federal and the success was conclusive, both for the automotive companies which displayed their models as for the large general public, who attended the event.

On a surface of 23,000 square meters, 71 exhibitors received 172,736 visitors of the Capital Federal, interior of the country and bordering nations during the eleven days of the event. It is estimated that 15% corresponded to a professional public. June 8th of that year marked the record for that event, with an attendance of 26,888 people. Another indicator of the interest awakened by the First Motor Show of Buenos Aires was the 648 local and international accredited journalists who attended the event.

The complete surface was occupied and it was necessary to add a covered facility for the display of trucks. This first edition displayed 13,000sq m of stands and more than 110 brands from a dozen countries were present.

Poster of the Event 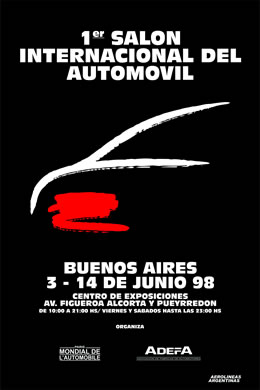